37 years alcoholic,non-Diabetic and non-Hypertensive moderately built Coolie from suburb presented with a discolored peripheral skin and non-healing ulcers in left lower leg and foot respectively with no history of trauma, associated with pain on movement, itching, odema and foul discharge on/off since3 years.

Patient unfolded a similar event on right limb 8 years back but the complaints were of sub-acute type as the event was not long standing and got relief within 6 months.

Team shalya (general surgery) diagnosed it as UttanaVataraktha (Deep vein thrombosis) and treated like wise. By 2 sittings of 8 Days for Sthanika Chikithsa (in situ treatment) with Jaluka (leech therapy) and wound cleansing, an appreciable recovery was seen.Along with oral medications in 20 days the calf region and foot odema was brought down from 14 inches to 13 inches and 11 inches to 10.5 respectively (in symmetry with right leg).

Immediately to this Virechana (purgative therapy) was planned by 2 weeks of admission to Shalya Department. There was drastic changes seen after 15 days of virechana like wound heeled and the digital pulse was felt sharply which indicated that there may be lumen calibration of veins which were previously pathologic in nature. In 3 months the wound healed completely with minimal discoloration at foot.

Women aged 50 years approached with low abdominal pain, irregular and excessive bleeding for 7 months. On advice of local doctor got ultrasonography of pelvis and got diagnosed as bulky uterus (10.5*6*5cm, Endometrial Thickness – 10mm) and multiple intramural fibroids (8- 10mm largest one). Hysterectomy was the solution offered form conventional medicine. But this was not acceptable for patient and shook her confidence.

As an alternative consulted for Ayurveda and found remarkable results and quality of life. She was subjected to aggressive sthanika chikitsa (local procedure) for initial 3 days and samana chikitsa (palliative care) successively for 2 months. After two months with simple drugs she felt decision of avoiding hysterectomy was a right one, based on USG report (which read Uterus measures 8.5*3.9*4.4cm ET – 4mm, Multiple small fibroids noted largest measuring about 5mm). Rest complaints like menorrhagia, metrorrhagia and Dysmenorrhea

Relentless efforts and desire for a issue a obese couple left nothing unturned to have a progeny , but they faced a futile result every time for 3 years across infertility centers even after IVF with donor. About define a hard luck; couple approached Srishti Fertility Centre which it turned out to be a silver lining.
Husband with 103 kilogram & grade II varicocele was diagnosed as Nashtaretas (Azoospermia: semen volume 0.5 ml and zero count), and wife as Anarthava (PCOD) with left fallopian tubal block.

He was put onto Shamana therapy (oral) like Shukrala (spermatogenic drugs)and Lekhanachikithsa (for weight reduction). It took 2months for the count to be 40 million from zero and another 5 months to reach 56 million. Volume increased upto 1.5 ml with good morphology of active motile viable healthy sperms and semen.

Parallel to this wife, who was loaded with hormonal replacement therapy was taken to decisive panchakarma therapies in hospital for10 days like Anuvasana and NiruhaBasti (medicated enema), Uttara basti (vaginal enema an unique contribution of ayurveda to womenhood) and counseling. Following to panchakarma she was put on Shamana therapy (oral medications) for a month. Ovary spilled a dominant follicle of size 21*19 cm in a span of 3 months

Considering the age and issue as precious IUI was done with Husbands sample, with the first attempt at Srishti fertility centre the couple is blesses with baby boy.

A women brought her disturbed and impulsive husband, a farmer by occupation of age 50 with complaints of occipital headache and disturbed sleep associated with sense of persecution since 10 years to Manasaroga department. After slicing the history the farmer had a severe gradual addiction to alcohol with almost carving on daily basis and tobacco chewing continuously.

Team started holistic approach to Madatyaya (chronic alcoholic) with satwavayajachikithsa (dynamic counseling) and Panchakrma like SarvangaAbhayanga (body massage), Takradhara (medicated liquid stream over forehead), Shiropicchu (medicated patch over scalp) &bastiChikitsa (Medicated enema) and palliative treatment (Oral medications) by admitting him for 10 days . It hardly took a week for his sleep to be improved form 4 hours to 7 hours and Anxiety and fear reduced to minimal. Now that he was off with conventional therapies obvious trivial withdrawal signs were anticipated with Ayurveda. Continued treatment for 5 months with 15-20 days follow up, with oral medications , farmer has made it to good social involvement & family communication and confronts alcoholic intake hardly once a month with avoidance of tobacco.

Sneezing and itchy morning with nasal obstruction on and often was a bane to 43 year old Clerk since 3 years even after specialty consultations across city. Associated with rhinorrhea (watery discharge), Headache, heaviness, throat irritation since 1 year and constipation since two months.

Team diagnosed it as Nasanaha (Turbinate Hypertrophy) on basis of history where patient was put on regular Nasal decongestants and exposure to dust. He was put on Sthanika (In Situ treatment) like Nasya (freshly prepared medicated nasal drops) for 7 days of two course and oral therapy for increasing vyadhikshamatva (anti-allergic and immunomodulation) for month.

All the symptoms reduced, Hypertrophied Turbinate was gradually normalized with normal breathing and itching mornings were no more seen even after 2 months of follow up.

Recurrent cold and nasal obstruction with mucopurrelent discharge was frequently encountered by 8 years child since 4 years. Not an exception to every guardian the parents got consulted to local physicians. But the complaints worsened since 1 year with severe cold attacks, foul smell from nose, thick muco-purulent discharge. Deep and painful vestibular cracks (right more than left) with complete nasal obstruction and oral breathingsince 1 week.

On examinationanterior nasal nares showed excoriation of skin and cracks, turgescent nasal mucosa with Mucopurulent discharge, crust formation and foul smell. Diagnoses was made as Putinasa (Atrophic Rhinitis) and treatment was began with   sthanikaChkithsa (in situ treatment) like Lepa (ointment), Nasya (nasal medication), dhumapana (fomentation by medicated powder) and Kavala (oral gargling) for 7 Days. Parallel to the local treatment Shaman therapy was started with drugs of vyadhikshamatavavardakawere prescribed for a month. Nasal obstruction and   Discharge was reduced completely by month and the child was followed up for 6 months with no complaints of replace.

At age of 60, when retirement gives sigh of relief and responsibilities this person had struck by diagnosis of Cancer. It all started with reluctant cough and respiratory symptoms for few months and later diagnosed as Multiple Myleoma. An usual  chemotherapy was started and initially patient coped well but later landed in side effects of chemotherapy.

An advocate by profession was speechless after being diagnosed as Cancer (Buccal  Mucosa with lung metastasis ) at Stage 3, he was left with minimal interventions with greater risks. Conventionally taken two chemotherapy regimen which was cautioned thereafter. A known diabetic since 20 years with amputated right leg making the scene helpless.

The patient was undergoing severe headache, nausea and vomiting, loss of appetite, low blood count and recurrent cough and dyspnea.

Patient was put on RASAYAN Therapy, few ghee preparations and oral applications with upavisha dravya . Within a week headache and nausea was under control. He was maintained with these Rasayan therapy for 6 months. During this course the patient had once bleeding from cancer part of buccal mucosa. An outstanding immunity was expressed by patient which can seen by reduced respiratory complaints without pleural effusion which is common in lung metastasis.

Patient was aided with blood transfusion once after lesion burst until which blood was under normal count. Patient survived for 7 months with quality of life till his last breath. This patient has shown caliber that Ayurveda can be a option if not whole cancer therapy in managing and combating chemotherapy side effects and delivering quality of life which is believed to be prime in    endstage cancers.

Diagnosed as esophageal cancer at age of 80 did not much waver the psychological status of patient. It was stage 3 and mattered less for patient, who was teacher by profession. It all stared with belching, difficulty and pain while swallowing and flatulence since more than 6 months. Later when noticed for weight loss, fatigue and weakness with aggravated  complaints  like vomiting nausea and even liquids being difficult to consume, made him to get investigated.

His determination for adopting unconventional treatment over conventional made him approach ABHAYA CANCER CARE at KLE AYURVEDA Hospital run in collaboration with RASAYU CANCER CLINIC, Pune.

Patient chose RASAYAN Therapy dispite of offering advantages of conventional medicine. He was  advised rasayan therapy. Within a month the patient was able to shift form liquid foods to semisolid diet with minimal pain and difficulty in swallowing.. surprising there was no weight loss. Patient continued treatment for 5 months with stable condition and took last breath without any complications supervening unlike known disease process. 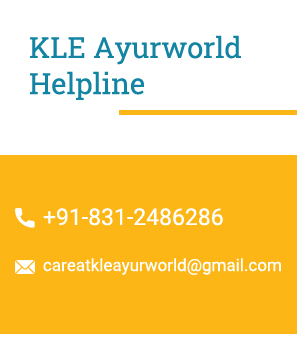